Diagnosis and Treatment of Breast Cancer 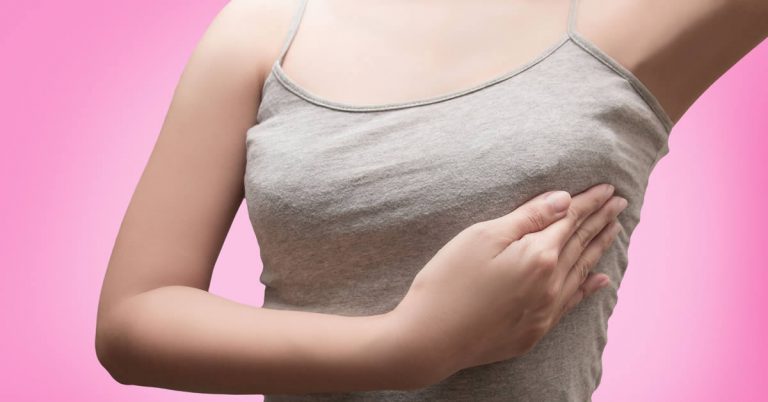 Breast cancer is characterized by the growth of malignant tumors in the glandular tissues of the breast. Today, more women are surviving breast cancer than ever before. Over two million women are breast cancer survivors. With early detection and prompt and appropriate treatment, the outlook for women with breast cancer can be positive.No one knows why some women develop breast cancer and others do not. Although the disease may affect younger women, 75% of all breast cancer occurs in women age 50 or older. Some of the noted risks factors of breast cancer include familial or genetics, exposure to estrogen, demographic factors (age, race, ethnicity, and socioeconomic status), nutrition and lifestyle, and smoking.Symptoms of breast cancer are hardly noticeable when it first develops but as the cancer grows, it can cause changes that women should watch for. The most common symptom of breast cancer is an abnormal lump or swelling in the breast, but lumps may also appear beside the breast or under the arm. Other symptoms may include unexplained breast pain, abnormal nipple discharge, changes in breast texture, or changes in the skin on or around the breast.

To screen or not to screen – that is the dilemma. The problem is not simply medical but also a matter of economics. Diagnosis of cancer, whether initial or recurrence, is the period of greatest acute stress for a cancer patient. This crisis is defined by sadness (depression), fear (anxiety), confusion, and occasional anger.The goal of screening women for breast cancer is to detect cancer in its earliest stage when surgery and medical treatment can be most effective in reducing mortality. Screening is only beneficial when an earlier diagnosis results in a reduction in mortality and morbidity and when the risks of the screening test are low. There are three methods for breast cancer screening that are currently practiced: X-ray mammography, clinical breast examination and breast self-examination.Of the three screening methods, the most reliable by far is mammography. However, in women with very dense breast tissue, both ultrasound and mammograms may miss tumors, which, however, can be detected by a Magnetic Resonance Imager (MRI). MRI is also more accurate for detecting cancer in women who carry the breast cancer genes BRCA1 and BRCA2. However, the principal means of diagnosis – and many believe the only definitive one – is biopsy – a minor surgical procedure in which the lump or part of the lump is removed and examined under a microscope for cancer cells. A doctor might perform fine needle aspiration, a needle or core biopsy, or a surgical biopsy. 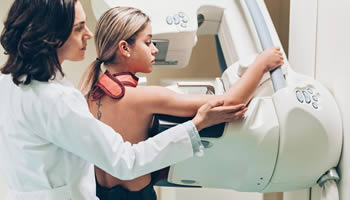 A mammogram is a special x-ray of the breast that often can detect cancers that are too small for a woman or her doctor to feel. Screening aims to detect breast cancer at a very early stage when cure is more likely. The amount of radiation needed to produce a clear mammogram (picture) varies with breast size and density. To avoid undue exposure it is highly desirable to use the lowest possible dose of radiation needed.A mammogram cannot distinguish between a benign or malignant tumor and thus is not 100% accurate. However, mammography detects over 90% of all breast cancer though a negative mammography does not necessarily indicate its absence. Mammography and clinical examination are complementary and if there is strong suspicion of a palpable lesion, the only way to make a positive diagnosis is by having a biopsy.The results of several large studies have convincingly demonstrated that breast cancer screening by mammography reduces mortality from breast cancer by approximately 30% in women older than 50 years. The American Cancer Society states that women of 40 to 49 years of age should receive screening mammograms every one to two years. Yearly mammography screening is recommended for women of 50 years and older.However the risks of any screening intervention need to be evaluated as closely as the benefits. The risks associated with mammography screening for breast cancer include, radiation exposure, false positives, and over-diagnosis. The risk of radiation-induced breast cancer from screening mammography is estimated to be minimal. The excess risk for breast cancer caused by radiation is increased with a younger age of the woman at exposure and increasing cumulative radiation dose. However, the benefits of mammography still significantly outweigh the risk of radiation-induced breast cancer.

During a clinical breast examination, the doctor checks the breasts and underarms for lumps or other changes that could be a sign of breast cancer. The CBE involves bilateral inspection and palpation of the breasts and the axillary and supraclavicular areas. Examination should be performed in both the upright and supine positions. One of the best predictors of examination accuracy is the length of time spent by the examiner.The efficacy of CBE alone in screening for breast cancer is uncertain. The results of several large studies have convincingly demonstrated the effectiveness of CBE when combined with mammography as screening for breast cancer in women older than age 50 years. The American Cancer Society advises that women should have CBEs every three years from age 20 to 39 years. Annual CBEs should be performed on women 40 years of age and older.

A systematic examination by a woman in which she uses her fingers to feel for changes in her breast shape and fluid discharge from the nipple in order to detect any abnormalities. It is ideally carried out every month. Estimates vary, but 80 to 95% of breast cancers are first discovered as a lump by the patient. Intuitively it follows that regular breast self-examination as a complementary screening modality perhaps along with mammography may help discover some cancers at an earlier stage, when the prognosis is more favorable.Approximately four out of every five breast lumps so detected turn out to be a cyst or other benign (noncancerous) lesion. If a lump is found, however, it is essential to determine as quickly as possible if it is cancerous or not. There are now several epidemiologic studies indicating that survival is increased in women practicing breast self-examination and that cancers detected by breast self-examination tend to be smaller. 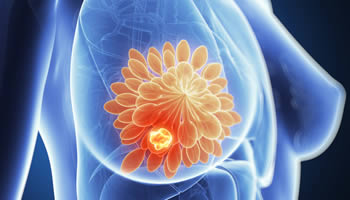 Once breast cancer has been found, it is staged. Through staging, the doctor can tell if the cancer has spread and, if so, to what parts of the body. More tests may be performed to help determine the stage. Knowing the stage of the disease helps the doctor plan treatment.The choice of treatment for breast cancer depends on a woman’s age and general health, as well as the type, the stage, and location of the tumor, and if the cancer has remained in the breast or has spread to other parts of the body. There are a number of treatments for breast cancer, but the ones women choose most often – alone or in combination – are surgery, radiation therapy, chemotherapy, and hormone therapy.Standard cancer treatments are generally designed to surgically take out the cancer; stop cancer cells from getting the hormones they need to survive and grow through hormone therapy; use high-energy beams to kill cancer cells and shrink tumors through radiation therapy and use anti-cancer drugs to kill cancer cells through chemotherapy.However, the current view holds that cancer is a systemic disease involving a complex spectrum of host-tumor relationships, with cancer cells spread via the bloodstream, and therefore variations in local or regional therapy are unlikely to affect a patient’s survival. Rather, the cancer must be attacked systemically, through the use of radiation therapy, chemotherapy, hormone therapy and immunotherapy.For women with early-stage breast cancer, one common available treatment is a lumpectomy combined with radiation therapy. A lumpectomy is surgery that preserves a woman’s breast. In a lumpectomy, the surgeon removes only the tumor and a small amount of the surrounding tissue. The survival rate for a woman who has this therapy plus radiation is similar to that for a woman who chooses a radical mastectomy, which is complete removal of a breast.If the breast cancer has spread locally – just to other parts of the breast – treatment may involve a combination of chemotherapy and surgery. Doctors first shrink the tumor with chemotherapy and then remove it through surgery. Shrinking the tumor before surgery may allow a woman to avoid a mastectomy and keep her breast.If the breast cancer has spread to other parts of the body, such as the lung or bone, chemotherapy and/or hormonal therapy might be used to destroy cancer cells and control the disease. Radiation therapy may also be useful to control tumors in other parts of the body.Because 30% of breast cancers recur, the National Cancer Institute urges all women with breast cancer to have chemotherapy or hormone therapy following surgery, even if there is no evidence that the cancer has spread. Such systemic adjuvant therapy, as it is called, can prevent or delay about one-third of recurrences.

Breast cancer cannot be completely prevented, but the risk of developing advanced disease can be greatly reduced by early detection.Several drugs are now available to treat or prevent breast cancer. Chemopreventive agents such as Tamoxifen and Raloxifene act to prevent the development of breast cancer by interrupting the process of initiation and promotion of tumors. The antiestrogenic effect of these agents appears also to lead to growth inhibition of malignant cells. Chemoprevention is the most promising intervention for achieving primary prevention of breast cancer at this time.

Tamoxifen is a nonsteroidal antiestrogen with a partial estrogen agonist effect. It is FDA-approved for advanced breast cancer, and is now used for estrogenreceptive cancer patients and also for high-risk individuals who are still menstruating and producing considerable estrogen.Given by mouth, it may increase the risk of stage I endometrial cancer and also may worsen vaginal dryness and hot flashes. Tamoxifen may be less effective as a preventive agent in women with a strong family of breast cancer.

Raloxifene hydrochloride is a selective estrogen receptor modulator (SERM) that blocks the action of estrogen in the breast and endometrial tissue. The incidence of estrogen receptor positive invasive breast cancer was reduced by 76% among women treated with either dose of raloxifene at 40 months of follow-up time. The side effects of raloxifene include an increased risk of thromboembolic disease, but not an increased risk of endometrial cancer.Also, there are recent studies that link low incidence of breast cancer with various environmental factors, especially diet. One food touted to be cancer preventive is soy (found in foods such as tofu, tempeh, soy milk and vegetarian meat substitutes), but there is no clear evidence for this supposition. Consuming more fruits and vegetables, eating less red meat (perhaps substituting soy protein) and avoiding cholesterol (olive oil has none) may also help in preventing breast cancer.A chemical (indole-3-carbinol or I-3-C) found in broccoli, cabbage and other cruciferous vegetables now available as a diet supplement may help prevent estrogen-related breast cancers. Another possible preventive measure is regular use of standard doses of anti-inflammatory drugs such as ibuprofen and aspirin two or more times a week.Finally, a recent study showed that exercise helps prolong life for breast cancer survivors. The precise mechanism is not known, but it is suspected that physical activity lowers hormone levels, decreases insulin resistance and reduces weight gain, all factors in breast cancer.
0shares
Medical and Site Disclaimer: